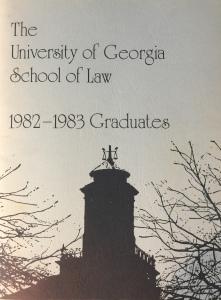 I’m continuing my chronological look at the racism in my past thoughts and reactions – and I now have arrived at my law school and assistant district attorney years.

That was only five years for me. Three in law school, and two as an assistant D.A. I discovered that law just did not suit my personality, so I left law.

But I can say that I did learn a whole lot in those five years, from the time I was 21 until I was 26. Most of it didn’t have to do with racism.

But a little of it did.

My law school experience at the University of Georgia was very white. I counted barely over a dozen black classmates of about 225 of us in my first-year law school directory – and then only a half dozen black classmates in my second and third years. The rest of us were white with maybe an international student or two thrown in. If I counted correctly, 181 of us graduated with law degrees.

Why did we lose about half of our black classmates before graduation while losing a much smaller percentage of white classmates? I don’t know. I could make some guesses, but they would be just that. Guesses.

Did our school worry about that loss? I don’t know. I wasn’t aware of it if the school was concerned. 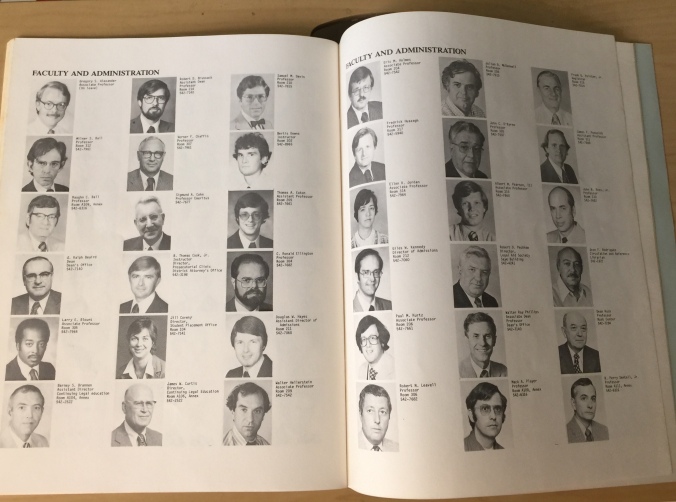 All of my professors were white. There was one black professor, but I was never in his class.

I only have memories of one black classmate. I think we were in the same section for our first year, and I remember him through all three years. But we didn’t hang out in the same group.

Our group of friends was all white. And I don’t think any of us thought anything about that.

My experience in the city of Athens was very white, too. I don’t recall there being that many black residents, at least in the parts of town where I spent my time.

As a woman, I was aware of being outnumbered by men in classes – and I was aware that very few of the professors were women. But I don’t recall my reaction to there being only one black professor. Surely I noticed?

Did my black classmates feel as if they didn’t fit in? Surely they did, in some ways. But I wasn’t aware of that. I never asked them how they felt.

Did the one law professor feel the burden of being the only professor of his race? Surely he did, in some ways.

Did I think about their feelings? I don’t remember that I did. I certainly didn’t ask how they felt.

After law school graduation, I moved to the northwest corner of the state to take a job as the judicial circuit assistant D.A. who was the attorney for the Child Support Recovery Unit.

But most of those we dealt with were white, just as most of this area of the state is white.

All of the judges I had hearings before were white. All of the D.A.’s office was white.

If you look at the whole of my life until this point in my 20s, after I graduated from high school my environment kept getting whiter and whiter.

Law school was the whitest part. By far.

And, honestly, I don’t remember there being many black students on the whole of the UGA campus as I went to classes or sporting events or other events.

The only time that I can say for sure that a black student caught my attention was when I saw Herschel Walker going to the football practice field. Pretty much everyone knew who he was.

Did I think about race much during my law years?

Hardly at all during law school. A little bit more during my ADA years. During those ADA years, I did deal with some black people – all men – as our office tried to get child support orders enforced.

But here in the mountains I saw more poverty in the white community. This experience helped me to see that poverty was not predominately a black problem. Based on my experiences growing up, I had thought that it was. I was wrong.

In my ADA job of collecting child support and getting orders for paternity tests, I saw many more white people who lived in poverty. My guess is that the number reflected the percentage of white people in this area. We here in Northwest Georgia had (and still have) many fewer black residents than there are in Southeast or Middle Georgia, so there is less black poverty here than in those areas – at least in my experience.

Was I aware of any overt racial prejudices during any part of my law years?

No. I was much more aware of sexism, because that directly affected me. I was unaware of any racism.

Not to say there wasn’t any. I just wasn’t aware of it.

It’s easy to be unaware of that which doesn’t directly affect you.

But a big part of the reason that I’m writing this series on my own racism is to force myself to be more aware – even if an issue doesn’t directly affect me.

Because, as I’ve said many times, we’re all connected. If anyone experiences prejudice and discrimination, it ultimately affects all of us.

I want to be aware of that. Because with awareness I can make some changes. In myself and the way I think.

More awareness will certainly help me be less racially-prejudiced.

And that is my goal, to let go of my prejudices and to act more as if we are all connected.